I began this painting last summer, exactly one year ago.  It sat unfinished for half a year until the beginning of this month.  The composition was completely overhauled; originally this painting featured a family of five tiny house sparrows.  I loved the birds in this image, but couldn't find a way to make it feel 'finished.'  They were lost on the large and heavily patterned canvas. Inspiration struck in May when a pair of barred owls took up our backyard as their home.  My neighbors captured some great images from their back porch and about a week later, the same owls perched outside our guestroom!  I've never seen an owl so close before.  I drew directly from those photos and inserted the drawings into my unfinished painting from last summer.  The rest of the greenery was inspired by my garden. 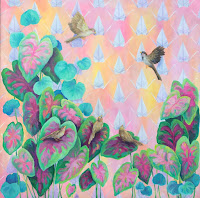 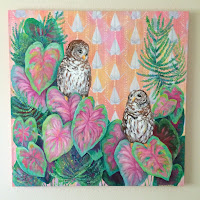 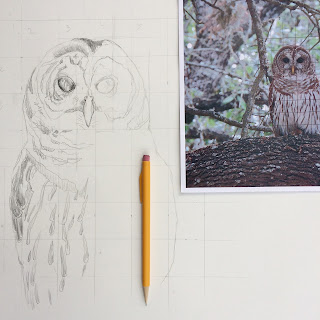 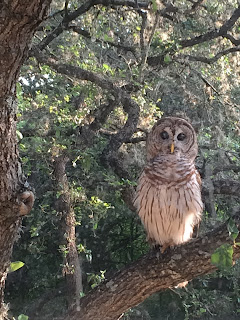 Step 1: I drew a half-inch grid over the photos and a one-inch grid on my drawing paper.  The grid aided in maintaining the proportions and markings as I enlarged the image.  The owl perched outside our window was very curious and sat there for at least ten minutes while we watched and took pictures.  Each drawing measures 8 inches tall, the largest birds I have done so far.  It was the perfect size for this three foot square canvas. 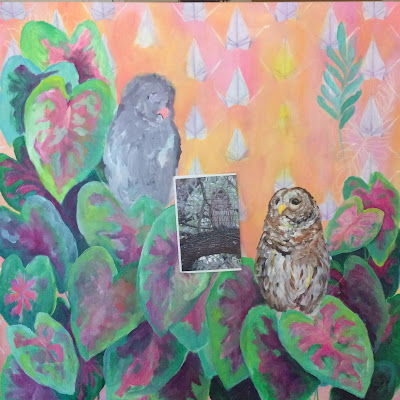 Step 3: Additional, larger caladium were added to weigh down the base of the image.  The plants proved to be the most challenging part of this painting.  I wanted them to appear painterly but not unfinished. Knowing my tendency to overwork areas, I periodically shifted my attention to the origami pattern.  The background was almost entirely repainted as colors were layered to mask parts of the original image.  The owl started to come to life with additional layers of paint (the only black in this painting is in the pupil, mixed with a little purple). 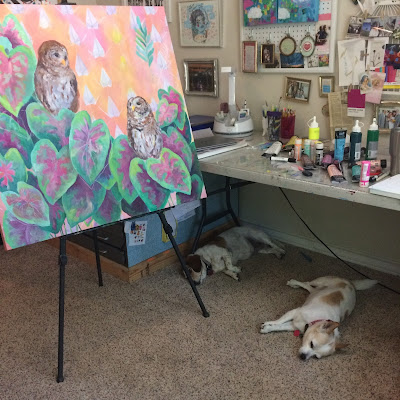 Step 4: The dog days of summer.  Charlie and Saddler love to be in my studio, but they never watch me paint.  Mostly they sleep and wait for me to give them rawhides. 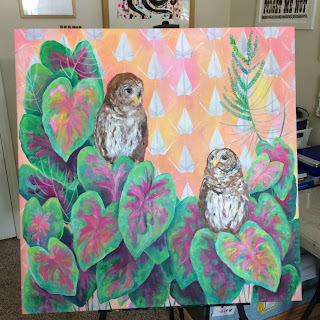 Step 5: The ferns are chalked in throughout the scene to establish visual rhythm, add texture and break up the heaviness of the darker leaves. 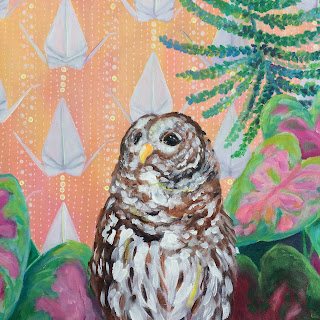 Step 6:  Detail work.  The marks on the fern are similar to the marks I used to paint the feathers on the owl.  The background is dotted with white and fluorescent yellow inks. 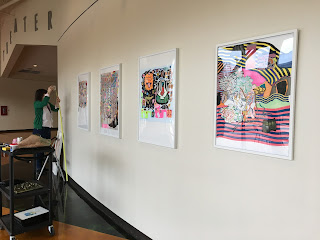